A comprehensive plan in managing bauxite issue to be readied by year-end, assures the Menteri Besar 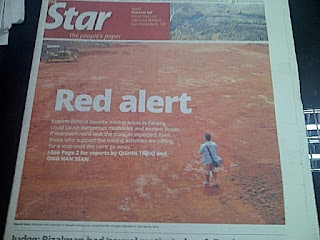 The Star – an MCA-owned daily newspaper, today - Wednesday, December 16, carried a front-page story on bauxite under the headline – Red alert.

Written by it’s Kuantan-based reporters; Qishin Tariq and Ong Han Sean, the full story that appeared in the subsequent page, has among others quoting experts as saying that bauxite mining areas in Pahang could cause dangerous mudslides and worsen floods if monsoon rains lash the state as expected.

In response to this, Menteri Besar Dato’ Sri DiRaja Adnan Yaakob who is still abroad, attending his youngest son graduation ceremony; has sms-ed to the local media-people the following brief statement;

The State Government has also received many complaints from many quarters; be they within UMNO and BN, so are from NGOs and some concerned individuals regarding this issue.

The Menteri Besar was not sitting still. He had on numerous occasions engaged in discussions with the stakeholders on this issue.

The Menteri Besar has met, no less than four (4) times with the operators, contractors and transport operators, advising them to take into consideration the hardship the people are experiencing due to their irresponsible mode of  extracting the ore.

Sadly, this advice has fallen on deaf ears.

‘WELFARE OF THE INNOCENT COMMON PEOPLE MUST OUTWEIGH WHATEVER ECONOMIC BENEFITS’

InsyaAllah by year-end, the State Government will come up with a comprehensive plan to manage this issue.

To all media – both mainstream and social, political parties, NGOs and concerned individuals; the State Government wishes to record it’s appreciation.

In the final analysis, the social benefit and welfare of the innocent common people must outweigh whatever economic benefits. – Khabar
Posted by Khabar Pahang at 05:57