'It's a figure of speech, simile, metaphor, hyperbole'

… Dato’ Sri DiRaja Adnan said of his comment about ‘cutting ears’, ‘jumping into Pahang river’ if the opposition wins in Bentong 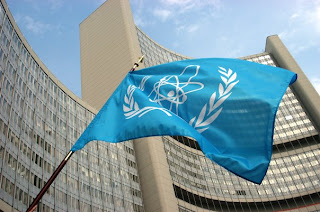 THE MOST RESPECTED AND AUTHORITATIVE BODY... The IAEA Headquarters in Vienna, Austria.

The Menteri Besar said this to journalists of the opposition-leaned news portal –
Malaysiakini, who requested him to response to the said negative reactions and ‘name-calling’ from leaders of the DAP and ‘netizens’, about his earlier comment

“In the English language, we have figure of speech. We have simile, we have metaphor, we have hyperbole…

“So, when I say ‘cut my ears’ that means, they can never win (in the Bentong parliamentary seat). That shows my (high) level of confidence. It’s not that if they win, they (can) take the knife and cut my ears literally, no…

“This is figure of speech, figurative language. So let these people study English,” Dato’ Sri DiRaja Adnan said to these journalists here, Saturday, December 1st, who had also approached and interviewed him a day before (Friday, November 30th) through which the comment about ‘cutting ears’ and ‘jumping into Pahang river’ came about.

‘I HAVE MY RIGHTS TOO’
“I thank you firstly, for coming back to see me,” uttered the Menteri Besar when he was approached the second time in two-straight days by these same journalists, here, Saturday afternoon.

When were told of the negative remarks made against him due to his Friday’s comment, Dato’ Sri DiRaja Adnan said, “I welcome the remarks made by the opposition members, in response to what I (have) said yesterday.

“That is their rights to give the remarks (so) as I have the rights to give my remarks too. I consider all these statements by them, as coming from my adversaries, from my political enemies. So it’s just as simple as that. A political enemy will never say good things about you”.

The State’s BN Chairman maintained that, what he had said were based on cogent facts. As for the central issue regarding Lynas’ rare earth processing plant in Gebeng, Kuantan he said, even the Vienna-based, International Atomic Energy Agency (IAEA) – the most authoritative body on atomic energy and nuclear, has declared the project is safe.

Thus, he stressed that the RM2.3 billion Australian-based company’s project that has been cleared recently by the Kuantan High Court to proceed, will not have great impact on the whole political situation in the state.

“And as of today, at this very moment, we have a 55-45 fighting chance to take back the seat from Fuziah, PKR (of the Kuantan parliament). I was just saying that, that’s all. Whatever that they want to say (against me, branding me as) gangster, animal… let them.

“If they can brand me such names, I can also brand them. I can call them stupid. So, what is the term that you use for people who don’t want to admit facts given by authoritative body, authoritative people?

“Who are these people? The people who just simply refused to accept facts. Stupid... If they can say I’m gangster, brutal; I can say they are stupid. I don’t deal with them, I don’t deal. Let the people decide in the general election,” Dato’ Sri DiRaja Adnan said.

Responding to a question about BN Pahang’s strength with the 13th General Election looming, he said, “Pahang will remain, Insya-Allah – with the help of the people, voters in Pahang, except the opposition voters; a Barisan Nasional stronghold”.

‘WE DO NOT GO BY THE LAW OF THE JUNGLE’

On actions by anti-Lynas group forming human barricades at Port Kuantan, to obstruct the transportation of rare earths from the port to Lynas Advanced Materials Plant (LAMP) in Gebeng, then surrounding the plant he said;

“That is you putting your words into my mouth,” Dato’ Sri DiRaja Adnan shot back. “I didn’t say that. Malaysiakini people are always like that. I’m telling you that this is not a country with law of the jungle.

“We have law and order so they have got to abide or follow the law. They shouldn’t flout the law and order. If they want to have demonstration (that are) within the ambit of the law, so be it. We are a democratic country”. – Khabar